Let’s take a look to the environment before the update; for this you can access the Redis Enterprise Cluster Management Console:

Do not use this to create/delete a database, you must use Cloud Foundry to do it. (cf command or UI) 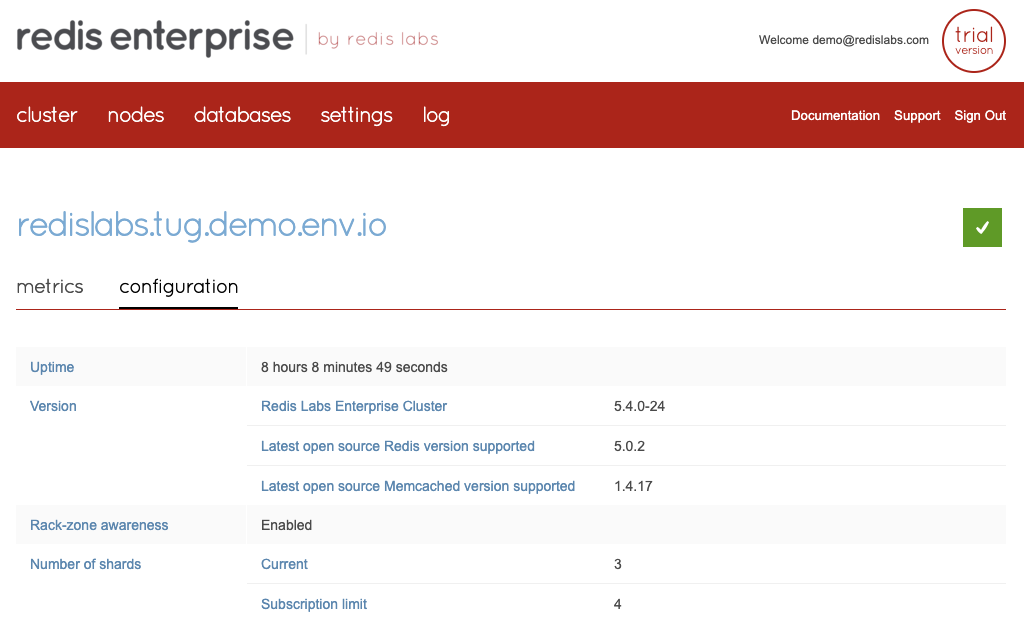 You can also use the rladmin command line to achieve this.

SSH to your Ops Manager and, bosh ssh to one of the Redis cluster VMs.

When I run the bosh vms command on my environment I can see the following VMs related to my Redis deployment:

The deployment is made of 5 VMs:

We can look in more details into the role of each VMS in the cluster, for this I will bosh ssh into one of the nodes:

Once connected use the sudo rladmin status to look at the Redis cluster deployed on PCF.

In this cluster you see:

Let’s now see the Redis version of the databases using:

As expected the version if 5.0.2, the same value that you have seen in the Web console.

Installing the latest version of Redis Enterprise for PCF

Once the latest release of Redis Enterprise on PCF is imported, the upgrade is easy to do:

Once you have clicked the update process will start, and you can follow the progress using the log information.

Nevertheless, it is interesting to see what is happening behind the scene using the command line on the VMS.

The update process using PCF will do the following:

Let’s look at the following screenshots to see how the rolling upgrade was done by PCF.

The cluster is up and running with 3 nodes with the version 5.4.0-24, and the node:1 is the master of the cluster

The node:1 is also the endpoint for the db:4

You can see 3 shards in this deployment:

So if you want to have a full service continuity with no data loss it is mandatory to use replication.

PCF has now started the process and stopped the node:1.

All the nodes are still on the “old version”, but the cluster master has been moved now to node:2; so applications will continue to work.

The errors are here to indicate that the node:1 is not accessible, and the node:3 also raised an error since the replication link is not available.

Here we see that the db:4 endpoint, now on node:2, Redis Enterprises cluster manager has moved the endpoint to this node automatically.

The fail over is done transparently with no impact for the application.

PCF is restarting the updated Node 1

Once the node:1 VM is restarted with the updated version of Redis Enterprise you can see the new version number and status.

The 3 nodes of the cluster are up and running, and you can see that the node:1 has been updated to the new version 5.4.4-7.

The master is still the node:2

For a short time the cluster will have heterogeneous nodes, this is not an issue.

You can see that the db:4 shards have the status OK, OLD VERSION that indicates that:

The update of the database is done automatically, so after a while, if you run the command sudo rladmin status databases extra redis_version you will see something like:

Updating all the nodes

The PCF update will continue and upgrade:

All the nodes of the clusters are now updated to the latest version of Redis Enterprise (5.4.4-7) supported on PCF.

The update of the database is done automatically, so after a while if your run the command sudo rladmin status databases extra redis_version you will see something like:

If you are doing a major upgrade for example from 4.x to 5.x, the cluster will automatically be updated to the proper release, but you will have to manually update the existing databases as documented here.

During the update, you will see other VMs stopped and started in the process. These VMs are used for:

These services and nodes are not part of the “Redis Enterprise” per se, but are part of the integration with PCF.

The update of the Redis Cluster is now complete:

The upgrade has been done automatically without any interruptions of service: